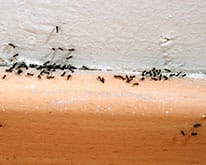 This is our most common ant, the little blackish species that invades our homes and yards in search of food and water. Abundant in urban areas, it develops to prodigious numbers and single colonies may harbor thousands of workers. It often becomes particularly noxious at the onset of cool weather in the fall, when colonies converge and move to sheltered, warmer quarters under homes, and foraging columns begin to seek food indoors. The species is one of the most persistent and troublesome of all our house-infesting ants. Argentine Ant workers seek out and feed on almost every type of food, although they are especially fond of sweets. Making themselves almost objectionable, the ants invade the house through minute crevices and cracks - filling along baseboards, across sinks, and over walls and tables in endless trails.

Remove food that is favored by ants. Trim trees to discourage the entrance to your roof or window areas. Reducing moisture sources helps, and so does the application of pesticides such as baits, sprays, fumigants and contact insecticides.

Carpenter ants tunnel through wood, destroying structures, whether they be homes or office buildings, and, like Termites or Carpenter Bees, they can become a structural threat. Carpenter Ants usually appear as large black ants. While they have distinctive features from most other ants, it often takes a trained eye to know the difference.

Carpenter ants are social insects and Workers will be sealing the colony where they have excavated a small cavity in the soil or wood to attend to their Queen, who has no other duty than to lay eggs. The few Workers that emerge from the first brood are small, but assume the duties of the colony. They open the chamber to the outside, collect food, begin to grow the colony by excavating galleries to enlarge the nest, and tend the eggs, larvae and pupae of the second generation. Workers regurgitate food for the nourishment of the developing larvae.

A complete inspection of the property and structure is necessary to determine the best strategy to take to eliminate a carpenter ant colony. Treatments include annual carpenter ant policies that are guaranteed and include sprays and baits.

I was scheduled for service today and John arrived promptly. I am very satisfied with the excellent service he provided to me today. He was professional, friendly, and completed the job in a timely manner. I have used Stanley Pest for a few years and have always been satisfied.— Pam G. from Whittier, CA
Read ReviewsGive Us Feedback