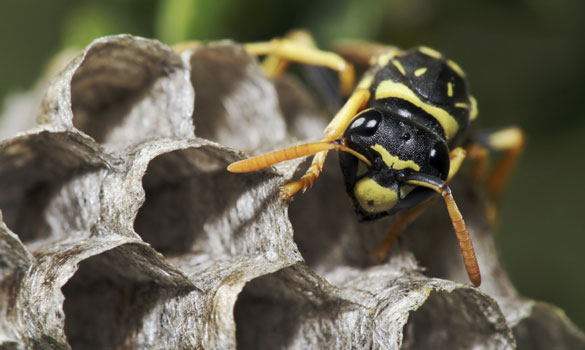 Whichever type of stinging pest that may be invading your home or business, we understand the importance of controlling or removing them and we are experts at handling any situation. Our expert bee exterminators can solve any bee removal task throughout Southern California.

Bees and wasps are considered beneficial insects, although they are considered nuisance pests because they will sting when they feel threatened and can cause damage to structures. Bees and wasps sting in defense of their colonies. When stung, an individual is injected with a protein which will cause pain and other reactions. Some of these reactions may include: localized pain, swelling, redness, itching and tenderness. These reactions can be treated with topical analgesics, ice or other over-the-counter remedies. An allergic reaction may include: hives, rash, nausea, headache or minor respiratory symptoms. Vary rarely, an allergic reaction can cause anaphylactic shock (difficulty breathing, swelling or blockage of the throat) and can be life threatening. These systemic symptoms require immediate medical attention. People with known systemic allergic reactions to bee or wasp stings should consult with a physician.

Domestic European Honey Bees are used in the United States for pollinating crops and ornamentals commercially. Sometimes wild or feral bees will decide to make nests in and around homes or other structures. We have found bee hives in many places, such as: inside walls, tree trunks, BBQs, cars, playhouses, attics, chimneys, underground service utility vaults, utility poles; sports field lighting, commercial signage, and the list goes on.

Honey bee nests are made from wax and are attached vertically to the upper surface of a joist or fire block, inside a tree to the top of the hollow. The bees in an active nest will keep it cool in the summertime by fanning their wings. In Southern California, bee hives can be active all year round and continue to expand as more and more combs are added. These hives will become a nuisance because as the honey builds up, it will start to stain walls and attract other pests, such as carpet beetles, rats, and ants. Also, the bees will jealously defend their home when they feel threatened.

The Africanized Honey Bee is a sub-species of her European cousin. The species is more easily agitated and quick to defend their home. Sometimes just the start of a lawnmower engine in close proximity will set them off. It is difficult to tell the difference physically between the Africanized and the European bees. An entomologist will need to measure wing venation and color differences in certain body parts to identify the species, but to the casual observer they are almost identical.

Many different situations that we encounter require different strategies to get the job done. Ideally, we would want to remove the colony intact and give it to a bee keeper. However, often times bee keepers will not take a colony of feral bees because they may have the African gene or may have viruses that may have been linked to Colony Collapse Disorder.

If you suspect you have a beehive in your home or business, let our trained professional exterminators inspect it and devise a plan that is best for your situation.

There are many species of wasps in Southern California, ranging from paper wasps to mud wasps to bald-faced hornets. They are considered beneficial because wasps help control other insect populations. Some commercial applications of wasps are used for organic pest control for growers of fruits and vegetables.

Wasps belong to the order Hymenoptera which includes bees and ants. Unlike bees, wasps can sting multiple times when threatened. Wasps can fall into two categories: social wasps and solitary wasps.

Pepe, the person with whom I was dealing, was very efficient. I not only hired this company for my rental, I then hired them for my own home!— Jo S. from Rancho
Read ReviewsGive Us Feedback