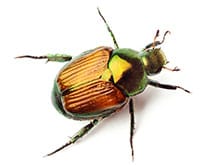 There are hundreds of different types of beetles, but most beetle species live in or on plants, wood, fungi, and a variety of stored products, including cereals, tobacco, and dried fruits. Some species, such as the Carpet Beetle, cause significant damage, feeding on human clothing, furnishings and other products. These larvae feed on natural fibers, while adults feed primarily on plant nectar and pollen. Wood boring beetles can attack and damage almost any wood structure. The Powderpost beetles, feed on hardwoods and bamboo. These pests attack furniture and other items made of wood. There is also the Rice and Grain Weevils and Indian Meal Moths. These weevils attack stored grains and seeds, which can hurt food supplies. What it lacks in stinging or biting, it makes up for in causing destruction on a potentially massive scale.

These hungry pests can easily devour much of your garden, turning a landscaping paradise into an unsightly nightmare. The beetles release chemicals called pheromones into the air. These pheromones attract other beetles. So if you see a few of them, they'll probably attract more.

The most common beetle in the United States is the Box Elder Beetle, which may pierce plant tissues while feeding. They are not known to cause significant damage and are not considered to be agricultural pests; but they can annoy people, thus they are considered nuisance pests. Also, the removal of Box Elder Beetles can help in controlling general bug populations in your yard or around your building.

When beetles become a pest problem, your pest management professional will provide a thorough inspection to accurately identify the pest beetle. Based on the inspection findings, we will develop an effective treatment plan to resolve the pest pressures that are specific to the situation.

After being quite unsatisfied with many competitors that I have interviewed for termites & carpenter ants infesting my home, I finally got rescued by the very competent professionals at Stanley Pest Control. Albert is great...he will make you feel like family. — Neil I. from Van Nuys, CA; 5-Star Google Review
Read ReviewsGive Us Feedback