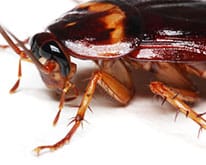 Cockroaches are much maligned insects. They're a pesky insect that has over 50 species in America alone. The few bad cockroaches that are common household pests found in warmer climates is the American Cockroach, German Cockroach and the Oriental Cockroach. These pesky cockroaches can be carriers of various diseases because they are commonly found near waste deposits or in the kitchen where food is present.

Cockroaches are found most commonly in restaurants, grocery stores, bakeries, and where food is prepared or stored. During the summer months, alley ways and yards may be badly infested. They're mostly active at night, and during the day they hide in dark crevices such as in or behind kitchen cabinets, drawers, stoves, and refrigerators. The female lays her eggs in a hard dark brown purse-shaped capsule, which she may carry about for several days, protruding from the end of the abdomen. The capsule is eventually dropped, and later the young cockroaches hatch and scatter. Both young and adults are generally feeders. Almost any crumb of food or other organic matter left exposed around the house will serve them as a meal. For this reason, good housekeeping is the key to cockroach control.

I was scheduled for service today and John arrived promptly. I am very satisfied with the excellent service he provided to me today. He was professional, friendly, and completed the job in a timely manner. I have used Stanley Pest for a few years and have always been satisfied.— Pam G. from Whittier, CA
Read ReviewsGive Us Feedback