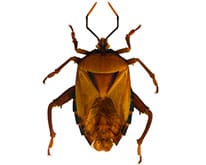 Brown Marmorated Stink Bugs (stink bugs) will enter structures such as homes or offices in order to survive the cold winter months. Although stink bugs do not pose a risk to the structure or the health of the occupants, they are considered a nuisance due to the numbers in which they infest structures. They are indigenous to countries in East Asia such as China and Japan and were introduced to the United States between in 1996-1997 in Allentown, PA. Recently, we are seeing stink bug populations taking a firm root and entomologists are expecting in-home infestations to increase dramatically.

The most effective treatment for stink bugs is done in the months of September and October just as the weather is changing. Many of our customers swear by the service we do for stink bugs and have done it every early fall. The secret is to have it done just before they try to enter your home for the winter. Service is a combination of sprays, glue-boards, and dust.

Pepe, the person with whom I was dealing, was very efficient. I not only hired this company for my rental, I then hired them for my own home!— Jo S. from Rancho
Read ReviewsGive Us Feedback